From Broke NSW (near Singleton) VK4BZ put on a solo effort.

For the first time ventured down south of Adelaide with the roving van for the JMFD.
It was a somewhat cobbled together effort as the van is in the midst of a makeover and update.
No huge antenna arrays, dishes, masts etc… just a setup that can park and be on air up to 24 GHz in less than ten minutes
and packed up even faster….

The site was a property owned by Barry VK5KBJ…ten acres on a hilltop with good views to the
north and west and generally good coverage in all directions. It is a popular site with southern Adelaide hams
and there were others nearby on site which was occasionally problematic, as one would expect!

In terms of operator numbers it was pretty quiet, especially for a VHF & Up operator. Signals from the city were fairly weak as there is
a bit of real estate in the way. There were other operators up north who provided regular contacts during the contest.
It was still the usual flurry of activity followed by periods of nothing…

Here’s a few happy snaps of the van on site…

There’s a cable leading away from the tank whip antenna on the front of the van. This was to allow Dave temporary use of the whip as it was the best performing six metre antenna on site despite the length of cable involved!! The RF field can get a little troublesome with equipment in the van if 100 W is used….I don’t think the operator has been affectered affeeted affectte affec affe……………………..

Contest desk in the van….

Not too far away was Dave 5KK. Here’s a night view of his station….

We had a late evening dash to a Maccas for food and COFFEE. The temperature was dropping fast at the site.
The 4 AM start to hit the overnight time slot was a bit erratic due to operator fatigue!
I think (the very few) other operators felt the same way! I crashed for a couple of hours when I got home
to try and recover from the lost sleep a bit!

How well we did remains to be seen but not too bad a day when all was said and done…maybe next year, maybe!

We had three generators running continuously for the JMFD. 2 Honda Eu20i and 1 Yamaha EF2400is.

Our ops on 80 mx had their dipole strung above and quite close to the generators with no noise issues.

The trick is to manufacture outboard powerline filters that can plug directly into the output sockets of these generators. Unfortuntately C tick in Australia does not mean the same thing as it does in Europe, where it is mandatory to fit EMI filters to the internal casing of the generator.

We use good quality EMI filters preferably with two series inductances/capacitors and rated to the current rating of the generator and mounted in a suitable waterproof plastic box.

THE SECRET TO SUCCESS HOWEVER, IS TO ADD A SUITABLE INDUCTANCE TO THE EARTH LEAD AS WELL, since most EMI filters only filter the common mode and differential mode between the Active and Neutral. Unless of course you can find suitable EMI filters that are used in the medical field, where the earth lead is also filtered.

Attached is a suitable circuit setup, details of the earth filtering and a picture of one such layout. There are available suitable waterproof female power sockets that mount internally to the box. The connection to the generator is a short male plug on a flylead so that the box sits on the ground right next to the generator. The whole purpose of the design is to provide appropriate filtering without compromising the electrical integrity of the generator as required by the various standards that apply to portable generators. 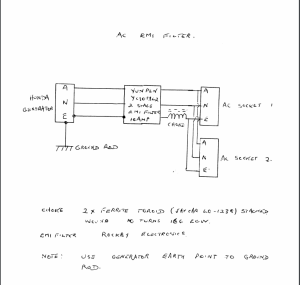