A bit of a report on a visit to Tim (K3LRs) station. It has been about 2.5 mths now, so I might have a few of the details a little wrong (it was a 6 week tour of the USA and this was at the start). So please forgive me if I get a few bits wrong. I’ve not examined the photos in detail yet.

At the conclusion of our visit to Dayton, Lee (VK3GK) and myself (Tony VK3TZ), travelled up to Buffalo, up state NY, (think Niagra Falls). This was done purposefully as we were also invited to a tour of K3LR’s contest station in Pennsylvania. After meeting Tim at Dayton, and enjoying his wonderful hospitality in the contest suites, with drinks and pizza, Lee asked Tim if we could visit, and he graciously agreed. 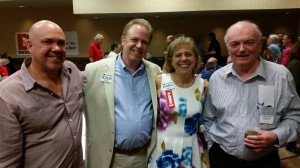 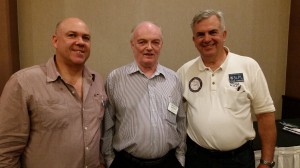 The F6KOP, Clipperton DX Club, French DXpedition guys (think Tromelin, Crozet, etc) were going to be there as well, after Tim was interviewed by them at DXEngineering. We stopped in at DXEngineering on the way and were met by several staff including Terri Grizer who was also at Dayton, walking the walk and talking the talk as her role representing DXEngineering demanded. We talked a little about my products, pricing and range for potential future business and after that headed off to the station. 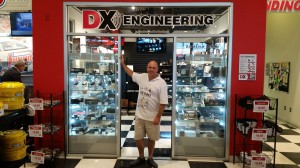 We arrived first and we were met by Sandy, a YL from DL who is representing and part of the DL team who are organising the up coming World Radio Team Championships in Germany for 2018. Sandy is performing duties as fund raiser, (as I understand it) and she spoke at the contesting forum at Dayton about the fundraising activities as well as large administrative and organisational challenges that lie ahead.

Lee was just about to arc-up on the 20m station when Tim and the French crew arrived. Smiles and laughter, mixed with oooohhh’s and aaahhhh’s at the equipment, and so room in the shack got a little bit tight with people. Tim makes alot of his own gear. Of note is the fact that all of the amplifiers are homebrew by Tim himself and he does this because he is unable to get the reliablility he wants and demands from commercially available amplifiers. Each amplifier is mono-band. So there is a 10m amp, a 15m amp, a 20m amp… etc. The interfaces are identical so any amplifier can be run from any of the radios. 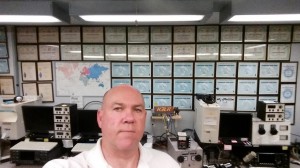 The walls are adorned with plaques and all manner of contest trophies. I was suprised to learn than Tim does not have the station compete in either of the CQ WPX contests (phone or CW). The main Multi-Multi events he operates are confined to the ARRL DX CW and Phone, and the CQ WW CW and Phone. Other times the station is active might only be a single operator, etc.

After the shack tour and description, Tim took us outside to have a look at the antenna farm. He described each array and tower in turn and what benefits it afforded the station. There are quite a few towers on the site and each supports one or more stacked arrays on one or more bands. There are several rotating towers, and there are lots of rotators in the shack. 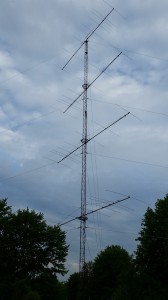 Apart from the main towers which support stacked yagis on 10m through to 40m, including 4 antenna stacks, each a half wavelength apart, there are other more specialist antennas, including:

There is a 160m switched vertical array, the center support is a tower which is the driven element isolated from ground. Four other wire elements with T – tops and relay switching surround the driven element at 90deg increments. Each can be switched out (made non-resonant when not used), or turned into a reflector or director. Thus it forms a vertical yagi (half an element) which can be steered in 4 directions. This antenna is described in John’s (ON4UN) low band dxing book. 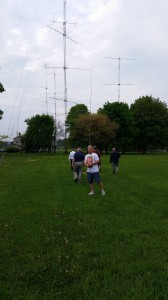 The actual house is modest, although the shack in the basement is rather large and jam packed with gear. The lot is slightly sloping and is much longer than it is wide. There are roads on either side and the neighbours are not actually all that far away. Surprisingly close infact. Tim has a good relationship with them and that is how he works to keep TVI and RFI at bay. At a guess, the land looked about 100m wide by about 600m deep. The 160m tower and array is at the base of the block and the 40m tower looks small in comparison to the other towers and yagi stacks. That gives you some idea just how big the towers are. 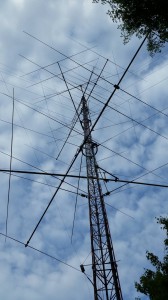 Tim has only just started buying some property on the other side of the road and there are some receive antennas located in those small blocks. 40m 4 squares and the like. I don’t recall seeing many (or any) beverage antennas.

In the photo collage you can see the main tower, some yagi stacks, the aluminium stock piles of old or broken antennas, and other various bits and pieces. The guy wires and turnbuckles are fitted with fibreglass rod to prevent wind vibration unwinding the turnbuckles and causing a catastrophic failure. Refer the loss of ES5TVs 15m stacked array due to this exact issue (not being done). 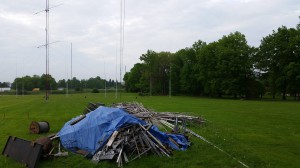 Lee and I had a great time at Tim’s QTH and were very grateful for the experience and wish to thank Tim for his fantastic hospitality and being such a gracious host with his time and energy. After the tour was done, we all hopped into cars and headed out to a local eatery (where everyone had a great dinner and a few drinks). Service was a tad slow, so Tim organised for us all to get T-shirts from the restaraunt. Wooohoo Tim. 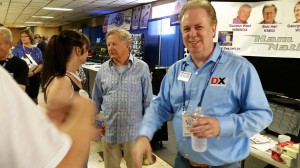